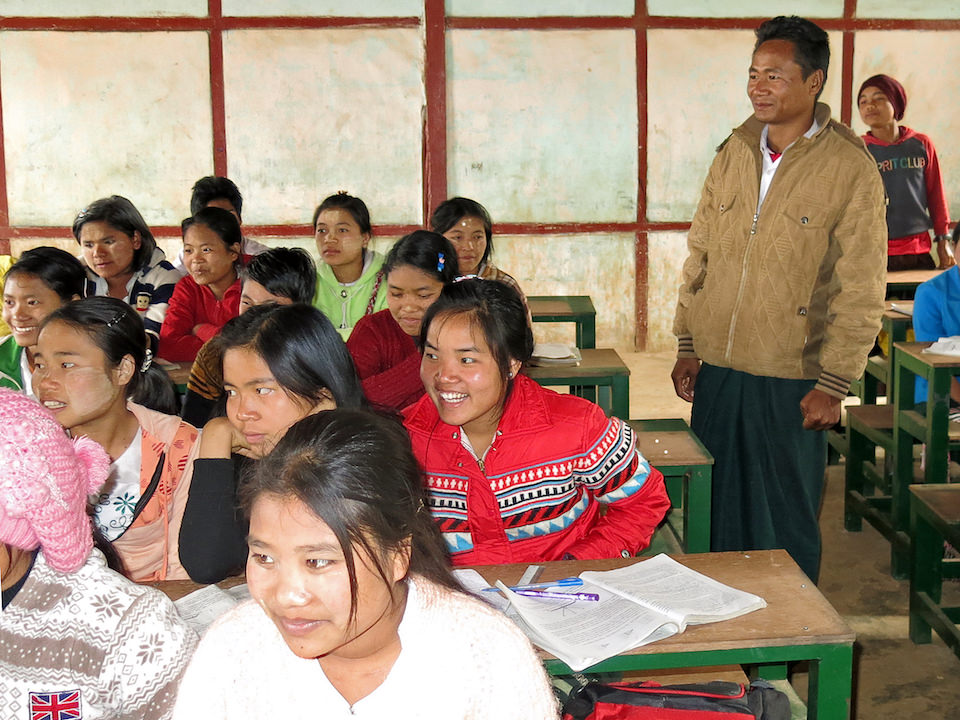 Students in government schools will benefit from teacher training program

Kampelet is an isolated, mountainous town in western Chin State, about 90 miles from historic Bagan. A former British hill station where the Raj sent their families during the hot, humid months, it’s a several hours drive to Mt. Victoria, which is a tourist destination noted for its mountains and jungles. Trekkers, bird watchers and orchid fanciers come to explore Nat Ma Taung National Park. The Chin, who call themselves “mountain people,” are among the poorest in Myanmar.

Cetana president Chenault Spence was invited to visit Kampelet by Americans from Metta Partners who support the Metta Geha orphanage, and by the Parahita Committee composed of local leaders that oversees the orphanage. Around 60 children, who come from poor villages surrounding Kampelet, live in the orphanage and attend local schools. Most of the orphanage residents are not actually orphans but kids from desperately poor or addicted families in the outlying villages.

Sponsors of the orphanage seek to give residents of this isolated community a window on the larger world and opportunities to gain employment in tourism. Only ten residents of Kampelet speak English, out of a population of 20,000. The surrounding villages make up a much larger number of residents. Kampelet has four primary, two middle and one high school (up to the 10th grade.)

While youngsters now attend English classes in the government schools, fluency is not a realistic prospect. With only enough textbooks for teachers, lessons are written on the blackboard and copied by students. Instruction focuses on memorizing items that will be on the matriculation exam, with no opportunities for listening or speaking.

Cetana has been invited to augment Kampelet’s education resources. This spring, Cetana and Metta Partners will send English textbooks for students. The books will be available when students return from the April-May summer break. Through 2016, Cetana will work with the Parahita Committee to plan courses for local English teachers who teach in the primary, middle and high schools. Classes will be introduced in 2017 for the two-month summer recess. Teacher trainers will also work with the youngsters at the orphanage. Eventually English classes will be offered to local adult residents and high school graduates who plan to attend college.

English teachers in the government schools are enthusiastic about the prospect of receiving additional training during their summer break. We expect to begin these workshops in June. This fledgling effort is seen as the first step in creating a learning center in Kampelet. It will serve as a model for the way that Cetana can serve isolated communities around the country.

Donations may also be made by check or with transfer of securities, in bequests and by other planned giving.

ALL DONATIONS TO THE CETANA EDUCATIONAL FOUNDATION ARE TAX DEDUCTIBLE. Cetana is a public charity, a 501(c)(3) Foundation as defined by the United States Internal Revenue Service.

YOUR CONTRIBUTION AT WORK IN MYANMAR

$1,000 Underwrite teacher salaries at the Academy for one month

$12,000 Underwrite rent and operating expenses for Academy for one year